Chiropractic Care for Torticollis in Babies and Infants

With the recent start of the ICPA pediatric program being offered right here on Long Island, (which is a lot closer and more convenient then trekking all the way down to Rutgers in New Jersey where I did the program back in 2003) it seemed like a great time to have a pediatric article in this issue. The topic I have chosen to discuss, torticollis is one that I have been seeing more frequently over the past couple of years, with referrals coming from pediatricians, frustrated physical therapist’s and parents. Torticollis, sometimes called wryneck, refers to an abnormal position of the head and neck, where the head is laterally tilted, with the chin rotated to the opposite side. There are two types of torticollis: congenital, which is seen with newborns often two to four weeks after birth, and acquired, which is seen in older children having had a sudden onset and may follow a mild trauma, strenuous activity or sudden change in neck position. The focus of this article will be on the congenital type. 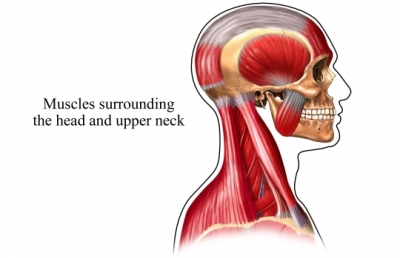 It is estimated that congenital torticollis affects approximately two percent of newborn infants and up to 34 percent of these infants present with a frank breech birthing position. Other non complicated causes to consider are extended time in car seats and infant carriers. Common associated complaints include restlessness, excessive crying, colic, difficulty nursing, constipation, frequent burping and regurgitation which can be quite unpleasant for both the infant and parents. Early correction of congenital torticollis should be the goal since prolonged contraction of the sternocleidomastoid (SCM) can be the cause of cranial and facial anomalies (plagiocephaly), as well as scoliosis and delays in developmental milestones. Plagiocephaly is traditionally described as a malformation of the head marked by an oblique slant to the main axis of the skull. You will actually observe a bulging of one side of the head and often one eye will appear to sit lower than the other even when you hold their head straight. Interestingly, more recently the term has been applied to any condition characterized by a persistent flatten spot on the back or side of the head, often called flat head syndrome. A number of studies have associated the recent dramatic increase in this “flat spot” with the “back to sleep campaign” which was initiated due to fear of SIDS. As chiropractors we are aware of the importance of allowing children to move and have lots of tummy time for the muscles in the cervical spine to strengthen and develop a lordosis. 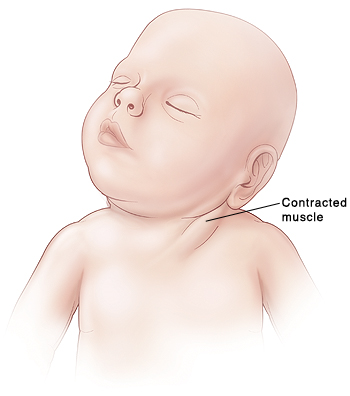 When an infant is brought in with torticollis by a very concerned or frustrated parent we typically want to do what it is that we do, adjust them. However, before a course of conservative chiropractic care is initiated accurate identification of the cause of the torticollis must be made to rule out complicating conditions such as retropharyngeal infections, osteomyelitis of the cervical vertebrae, drug reactions, and spinal tumors, which may potentially lead to morbidity. X-rays of the cervical spine should be utilized to more accurately identify the cause of the problem. Typically upon palpation you will find subluxation of the upper-cervical spine and trigger points in the SCM on the side of lateral bending. Measurements of the head should be made to determine if their is asymmetry from right to left side, any visual bulging or flattening should be noted and evaluation of sacral subluxation should be made as well. If you are not comfortable with evaluating pediatric patients, thorough evaluation is taught in both ICPA and ICA pediatric programs or simply refer to a colleague that has specialized training and they can assist you in the management of your patient. Once the areas of subluxation have been identified correction can be made with a light sustained contact to the area to guide the small vertebrae into alignment. Instruments such as the activator, interagrator, impac arthrostim (my favorite) or erchonia adjustor work very well too and are very specific in their delivery. Cranial work is also encouraged especially in the presence of facial and cranial asymmetry.

I have had chronic cases of torticollis that have lead to such malformation of the head that they present with skull caps/helmets with the goals of preventing and correcting further deformation. Parents of these children often report the greatest positive change occurred after chiropractic care was initiated and typically after just a few visits.

In conclusion, it is up to us to get out there and educate our patients, pediatricians and PT’s about how we offer a non-invasive highly efficacious form of care in dealing with congenital torticollis especially since it is an issue that is time sensitive in regards to the complications associated with uncorrected torticollis.